“María’s Island” will appear in a collection of poems & short stories by Luis S. González-Acevedo (release: 2019-2020) 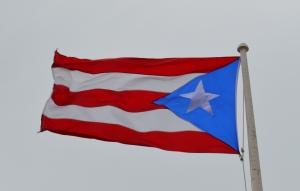 Anton Cortázar Toledo quivers in front of the urinal, steps back, and pulls on the cold lever. Waters rush down its porcelain back, disturbing the fresh blot of yellow like a cleansing waterfall.

“Boarding for Flight 920 to Orlando will begin shortly. Please have your boarding pass ready.”

Anton moves quickly toward the lavatory. After wetting his hands with lukewarm water, he positions them under the automatic soap dispenser, wets again, and rubs vigorously. The sight of the baptismal liquid washing away the tainted suds intrigues him.

The hand drier starts automatically as his fingers slide steadily back and forth below the vent. “Good as new,” he celebrates under his breath.

“Good afternoon,” says the stranger stepping up to dry his hands.

The man leans in a little, as if confused, but eventually smiles and nods.

“Good afternoon,” Anton adds –in English– as he walks away.

As he steps out of the restroom, he can’t help but notice the digital clock with bright numbers on the wall –an acute awareness of time confronts him.

Near the gate, passengers continue to line up as Anton moves toward the end of the line.

He greets an approaching American couple with familiar warmth. They glance at him with little interest, saying nothing. Red-cheeked, he moves forward with the line, tugging along his carry-on.

Anton sits on the floor, next to his luggage. He pulls out a puzzle, a souvenir he picked up near Laguna del Condado. The puzzle conjures the smell of the lagoon’s troubled waters. He carefully selects a piece from the box and lays it over a previously assembled cluster. It seems right, but doesn’t settle perfectly. It’s slightly forced. He scatters the remaining pieces but doesn’t find one that’s more fitting. Given the piece’s shape and colors, it appears to be the only possibility. He presses gently, again, but the cluster doesn’t give naturally. Steam rises from within, and his chest inflates and deflates precipitously. His temples play a soft rhythm.

Groping himself with uncertainty, Anton pulls out a phone from his blazer’s inner pocket. No emails. No texts. No voicemails. The empty inboxes don’t surprise him, but he’s disappointed that he hasn’t heard back on the promotion. He clears his head, refocusing…

The woman standing nearby holds him captive with her mere existence. She sobs delicately. Silently… Her shoulders shimmy.

“She must be dear to someone,” he thinks.

Her head sinks. His eyes are locked. He studies her meticulously, intensifying the quest for truth. His eyes pause briefly on the tag attached to the oversized bag between her elbow and torso, “María C. Burgos García.” She stands hunched, face drawn to the floor while cupping her mouth and nose with a trembling hand.

María’s breathing hops as she tries to catch her breath between private sobs. These vital moments unfold under Anton’s microscope…

“She weighs what she leaves behind against what awaits.”

“Who? What does she leave behind?”

“What? Who claims her in Orlando?”

“Ladies and gentlemen, boarding for Flight 920 to Orlando has been delayed. Please stand by for further instructions.”

Some passengers scatter about, but María remains rooted. She keeps to herself, eyes fixed on the cinematic images reflected from the waxed floor. Anton sits on the seat closest to his place in line. From there, he witnesses the wet trails coming to life on her face.

Anton’s eyes shift to his phone, not wanting to be too obvious with his observations. He taps a random app and skims quickly through a myriad of senseless posts.

Gazing surreptitiously at her, he thinks: “Go or stay?”

Anton stares pensively at the gate.

“Ladies and gentlemen, we will begin boarding Flight 920 to Orlando.”

Turning away from the gate, his eyes rush down the long white corridor, cleansing his soul as they run. They’re drawn to Avenida Ashford by the lagoon.

His phone chimes. He checks his email:

I just received news that you have been promoted.

“Stay or go?” he asks himself, as if demanding an answer.

María looks back at him with smiling, brown eyes as she quickly retraces her steps.

“She’s choosing to stay,” he says with amusement and some emotion –his voice breaking. The small crowd nearby stares at him –bewildered.

Tossing his boarding pass into the trash on his way down the corridor, he follows María toward any dreamful possibilities floating in his lagoon.